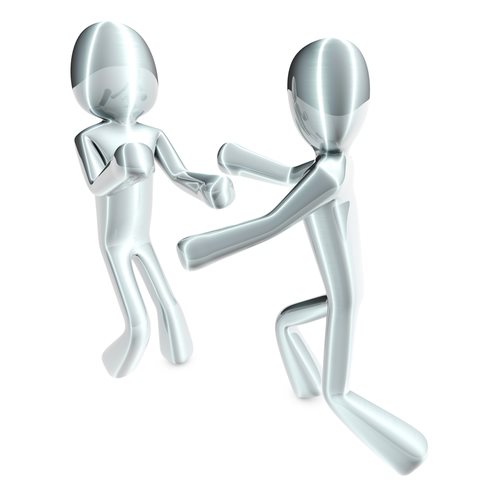 Assault and Battery: Defenses
Prosecuting a purported incidence of violent physical action as assault and battery requires that the legal system prove that nothing about the context of the action could excuse its performance and that the intention or responsibility of the actor can be demonstrated. A possible avenue of legal defense against a charge of assault and battery is to make the claim that the actor had consent from the aggrieved party, as in the implicit or explicit granting of a degree of latitude to take such actions.
Examples of consent being granted for an action that would otherwise constitute assault and battery can include a rough athletic competition or the performance of surgical procedures. An individual tasked with enforcing rules on behalf of the law or a disciplinary institution may also be able to claim “privilege” for their actions. After examining the possible motivation and justification behind an act, the legal system must determine if the act itself occurred within permissible limits, which vary according to jurisdiction.
Assault and Battery: Defenses: Consent
In order to determine that an act of assault and battery has occurred, an important element to consider is the issue of the offensive or injurious physical contact promised and then delivered as unwanted by the victim. In certain cases it can be argued that the subject of a violent act granted a degree of consent to the actor. For instance, participants in rough athletic competitions enter into such activities with the tacit acceptance that they may be subject to certain actions, at least within agreed-upon limits.
Surgeries might also be understood as severe forms of assault and battery if not for the consent of the patient. Indeed, when surgeries exceed their stated and reasonable cases, physicians may be legally liable. Legal practices for the understanding of consent may differ on the degree to which consent can be reasonably granted.
Assault and Battery: Defenses: Preventing Another Crime
A strong legal defense against a charge of assault and battery may be available to the defendant who can demonstrate that he or she was acting in order to prevent another crime from being committed by the purported victim. In order for this rationale to be accorded weight in a court of law, it must be demonstrated to have been enacted within reasonable limits and in proportion to the crime being committed.
The application of violent force in response to the violent assaults upon oneself or against another person will commonly be afforded the greatest latitude. Actions taken to prevent another crime which was not violent in nature may be liable if the actor resorted to violence unnecessarily.
The amount of force that may be applied in the defense of one’s possessions or residence vary by jurisdiction. Though abusive speech may cross over the threshold of legal permissibility, it will never be granted legitimacy as a justification for violence simply on the grounds of the offense suffered.
Assault and Battery: Defenses: Defending Property
Part of the protection granted to property owners and homeowners under a typical system of law is the right to use force, as defined within varying permissible limits, in the protection of that property. Some cases which would otherwise be prosecuted as acts of assault and battery may be protected under the privilege of defense of property. Such rights are, however, generally less overarching than those granted for self-defense and the defense of others on the principle that human life and well being supersedes property.
If deadly or severely injuring force is used in the course of defending one’s property, it is most likely to be permissible in the instance that the property owner was faced with deadly force as a result of acting and was forced to use comparable force as a response. The degree to which such fear must be justified differs according to an area’s legal and social culture, with some sections of the United States allowing homeowners wide discretion in using force against intruders, whereas in other legal systems, such as New Zealand, deadly force in the protection of property is widely restricted.
Assault and Battery: Punishment
The concept of assault and battery is commonly given a wide application, ranging from instances of offensive touching to deadly attacks in order to grant recourse to legal action on a wide basis. The kinds of punishments potentially incurred from a conviction can thus also vary across a wide spectrum.
Terms of imprisonment for serious charges such as aggravated assault are usually defined by local statutes. Less serious charges, referred to as “simple” assaults which lack the presence of serious injuries or severely harmful intent, may be addressed with shorter periods of imprisonment, possibly in local jails instead of state or Federal prisons, or with less punitive measures such as requirements to render community service or to participate in anger-management courses. The severity of legal penalties incurred can also vary according to the kind of method used to accomplish the attack, traits of the victim, and the context for the dispute.
Assault and Battery: Defenses: Assault Lawyers
Defendants faced with charges of assault and battery are generally advised by legal authorities and commentators to find experienced assault attorneys early in the course of mounting a legal defense. The recourse to legal representation has been recommended by experts particularly for cases in which the basic physical facts of an attack are not strongly disputed.
Assault lawyers typically specialize in minimizing any exacerbating factors at play in the prosecution of charges, such as prior convictions on a record or aggravating factors in the assault. In the event that a conviction cannot be avoided, assault lawyers often try to minimize the effect that this occurrence will have on the defendant’s life after serving a term of imprisonment.