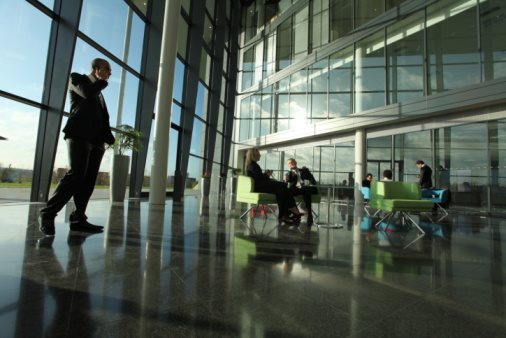 While the Federal Government makes
the majority of decisions that affect day–to–day life for Americans, many of these actions, in a way, are outsourced to State agencies. These State agencies are the ones that many Americans interact the most with
depending on the problems or concerns they have in their day–to–day lives.

A State agency will perform many administrative functions that can go
unnoticed by the American public if everything runs smoothly. The welfare
office of a state is considered a State agency, even
though some funding comes from the Federal Government; funding also comes from State taxes.

Unlike overarching agencies, State agencies are responsible to the citizen of their
own particular state. Many times State agencies
perform semi-judicial actions in developing further regulation or
changing the regulation already on the books.

A State agency is made in the same structure of a Federal agency. The head of the State agency is
equally appointed by the governor of the state; much like the President appoints
the head of FEMA or the Defense Department. The workers are employees of the State and are held
to public accountability laws. It is their job to promote the social good.

In many ways a State agency
resembles that of a Federal agency, except their jurisdiction is different. There are State agencies to regulate trade and commerce, regulate their coastal waters,
law enforcement, and other needs deemed necessary by the public. A mandate of a State agency is usually very similar to
the Government agency it mimics.

Many times a State agency will
work with the corresponding Government agency in order to achieve the
best results for the citizens of the State, and because of the help of the Federal Government an equality of management can be formed from state to state.

State agencies receive funding from both the Federal and State governments. This allows for the State in many cases
to free up tax money allowing for more services to be provided. State agencies
also have a responsibility to work with smaller agencies at the local level.
Each level of government is intertwined in order for a more integrated process of social services to be provided.

A State agency also performs semi-judicial functions since not all changes to
regulation need to be handled by the State Legislature right off the bat. However, these actions are limited usually to
how the State agency will spend their allotted money for the year and where it will
be spent.

At times, problems arise over the course of a
fiscal year that need quick action. It falls to the State agency to develop a rapid response. For example law enforcement can
run into financial constraints during Presidential campaigns. While
the State as a whole can know well in advance that the presidential aspirant
will be stopped, those
in the State can be a whole different question.
Then the State agency needs to respond quickly allocating funds for the proper protection, whereby also decreasing funds for the entire
year. If more is needed the State Legislature is then
petitioned, but the initial action is performed by the State agency.

In the long run, State agencies act and behave like their Federal
counterparts. The main difference is jurisdiction. While the Federal Government is responsible for the whole of the country, the State agency is responsible to their direct citizenry. Many of the same
processes from Federal to State are also mimicked creating an innate continuity within the system as a whole.